The Australian Dilute first appeared in Brisbane in 1944/45 in an open aviary holding a collection of Normal Gouldians. This was one of the very first mutations to show itself in Australia and a great deal of interest and curiosity was shown by other breeders. In those early days there was a real lack of knowledge on how to nurture and develop something as fragile as a new mutation, with losses being disappointingly common with the Dilute for the first couple of seasons. These were difficult times for breeders with very little choice of seeds being available to them; the usual diet consisting of only one or two different types of millet (and for years this was the staple diet used) plus Condy’s Crystals put in the water as a Water Purifier once a week. 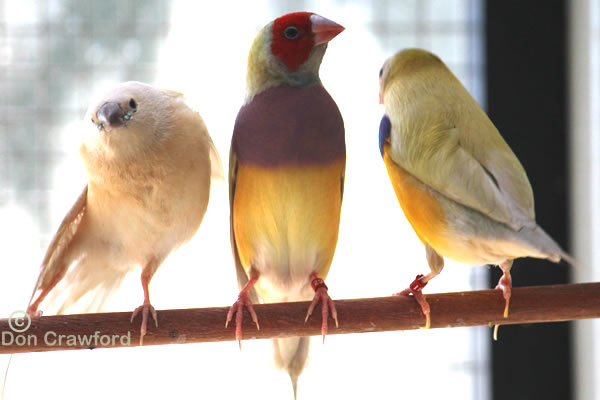 Original Australian Breeders
Eventually some of these birds were passed on to Mr Ray Murray of Victoria, one of the more successful and knowledgeable breeders of the time who had had a lot of early success with his breeding techniques. Unfortunately old age became the enemy of Ray Murray and after many years, the survivors of the mutation were sold to other keen breeders throughout Australia.

I first saw the Dilute in the flesh in 1955. They were being developed by Mr Cochran of Marrickville, NSW. He was a Canary show judge and Gouldian breeder, who brought his experience with him from Scotland. He had lots of success for a number of years, then sold his collection when he was in his late eighties. The Dilutes were well established in his aviaries at that time.

A Rare Mutation
Today the Australian Dilute in its pure form is, for some reason, still a rare mutation. Maybe their lack of numbers is from the indiscriminate breeding under Bengalese and crossing Dilutes with other Bengalese-bred mutations, 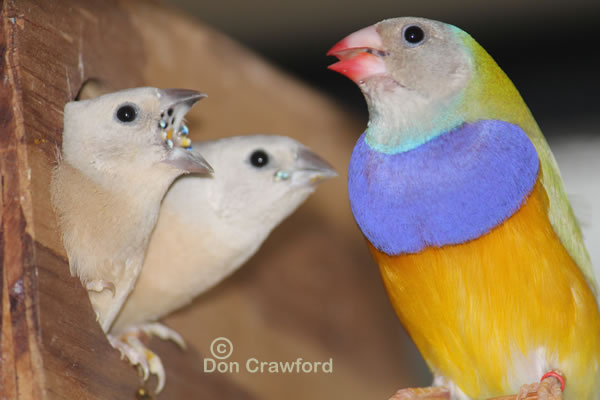 particularly the European Blue Back, produces a secondary colour of a much lighter blue. However, this combination of two colours does nothing for the survival and development of the Dilute, only making it rarer and much more expensive. We believe there are lots of Dilutes available in this mixed form, but only a few dedicated breeders with the pure Dilute.

Two Main Problems
So why should this be a problem and why have I decided to make comment? Well, for two reasons that may not be so obvious to all breeders, especially those that use the European Blue as their main mutation to establish new colours.

I would suggest that anyone with a pure bloodline of Normals should treat them as the most important bird that they possess. Don’t bring in new blood without first doing your homework on where these birds are being acquired from. I know of only three breeders that meet this requirement. They have been breeding normals for over ten years, changing new blood between them repeatedly and keeping their birds to a very high standard. Hopefully this is where the true Australian Blue will come from. History shows that Blue has shown itself many times in the past, but failed to be seriously challenged by the more-experienced breeders of the time. 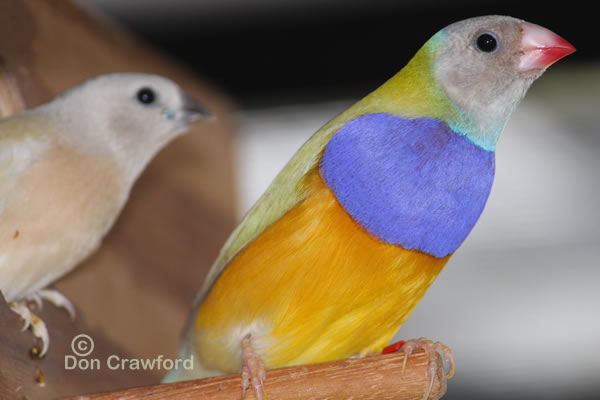 Points to note re: the Dilute
The Dilute is now well established in my aviaries and birds of high quality are now being produced. So let’s look at the characteristics that a pure Dilute carries in their original form.

The ‘Green Backed’ Dilute
There are also lots of Dilutes on the market with Green backs, that are being passed off as the correct coloured Dilute. They are known as Green Backed Dilutes and from the emails that I have received, most believe that they are the true and only Dilute that is available. 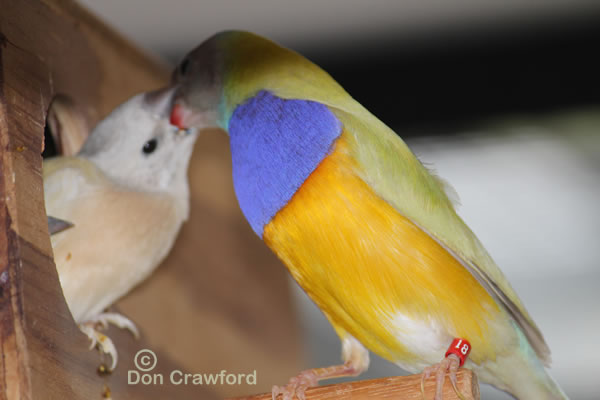 Their photos are in lots of Gouldian magazines and are named as Green Back Dilutes which is very confusing to most new breeders of the Dilute.

I believe this name is wrong, but saying that, yes there is a Green Backed Dilute ‘CROSS’, a secondary-coloured mutation of the Dilute, originally created by crossing a White Fronted Normal with a Dilute. The colour was permanently fixed by breeding the colour back through other Green Backed Dilute birds. This bird should only be known as one that came about from the breeding of a combination of two colours, to create a secondary-coloured Green Back Dilute Mutation.

Good Breeders Vs Bad Breeders
This article is in no way directed at the good guy breeders, who show their commitment and effort to improve their breeding techniques and specialise in producing quality Mutations, and there are lots of them!! But it is a wake up call to the no-brainer Bengalese breeders who are still producing inferior, diseased birds. For instance… one of the big breeders with Bengalese told me that he repeatedly took up to FIFTY eggs a season from each of his Gouldian Hens and was proud of it! He then sold these hens to unsuspecting breeders in the same season. This is what is called ‘milking a hen’ and the result is that these hens are forever worthless.

It’s not too hard to realise how and why the original Breeders of the Blue did create such a disaster for the rest of us to spend years to NEVER rectify the problem. ‘Moron’ is not a strong enough word to describe this type of stupid behaviour.