Soon as we started this Breeding Season, it became obvious that this season could be very rewarding but also slightly more exciting, because of the introduction of new blood lines that we had acquired some seasons ago. These new normals were crossed through all our Mutations, purely to accelerate the quality of our birds that we hope to achieve this year.

As breeders of many different types of Mutations, as well as the serious effort that we have put into producing better quality Normals with a goal to breed Mutations as good as our Normals – our Normals are very enthusiastic breeders and do most things right. We are only one small step away from achieving this quality with our Mutations. This is all very achievable if you have a doable breeding program which is simple to work and shows desirable results each breeding season.

To date we are producing some very acceptable young birds from good size nests, with the stand out being the parents “single-minded” feeding ability resulting in all the young stuffed full of good food. 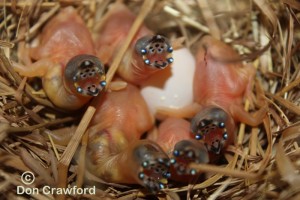 This in my opinion is the most important quality that a breeding pair can possess, especially when they have just hatched a nest of six or more. If they are not good feeders then disappointingly and most likely only a few will survive. This then becomes very frustrating and a loss of interest from lack of success in what you have bred can ruin the excitement that you had at the start of the season. So then it becomes about next season.

A Freakish Pair Breeding Record
Birds with this special “Physical and Genetic Ability” to feed large nests are always genetically related, and as I said, it is passed on by following the correct breeding procedure that does not allow the introduction of lesser genetic blood lines to contaminate your breeding program.

We have been very fortunate to acquire a pair of these exceptional birds two seasons ago and to be quiet honest, I was humbled by the performance of this unique pair of Gouldians! They were fledged in 2009 and are now in their sixth breeding season. Their first four seasons they produced 72 young, YES! 72 YOUNG! that is an average of 18 per season which is all documented and since we have had them another 18 young to date. 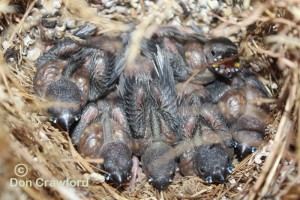 So in their fifth and six season, nine per season so far, that is a total of 90 fledged in six seasons!!. This could never have been achieved without the physical and genetic strength that we mentioned earlier, as this pair never show any sign of breeding stress or feather deterioration as most birds do while producing multiple large nest after nest. Sure some pairs produce large nests for one season, but never consistently over a six year period. They surely are “UNIQUE”!!

The Method
We do get lots of emails relating to the confusion of how to prepare and soak seed without the use of harmful chemicals. Our method is simple but does require some thought and dedication, because after all you will be feeding it to day old chicks until they are fledged and also moult; in most cases the young will be fed for more than six months.

Because of this long period of time that they consume soaked seed, we consider that the use of chemicals on our seed would be far too dangerous for our birds long term. We start with farm-fresh grown seed that we consider very important, as seed that is old and stored for a very long time will have lost it’s potency and will be useless, lack nutrition when soaked and can’t be sprouted.

To start we use a glass jar with a hole cut in the lid and some stainless steel gauze inserted under the hole in the lid, then put the required amount of seed in the jar. We then use the hottest water that is available from the hot tap, not boiled, poured through the gauze and onto the seed. It is left for approximately six to seven hours overnight (sleep is not a priority at our place). It is then rinsed in a sieve repeatedly, then put on a cloth still in the sieve to dry the seed out. You will notice the fresh seed has the start of the sprouting process. It is then fed to the birds. 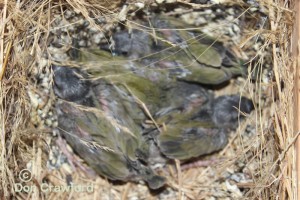 A Little Hint
If you feed twice a day, the excess soaked seed can be left in the fridge til needed for the second feed. A little hint: if you are at home and can feed twice a day, the second feed should be no later than 2 pm, giving the parents a few hours to do their job of feeding the young before dark. You will definitely notice the difference in the development of the young babies. In the southern areas if fed any later in the afternoon the parents are more interested in settling down for the night as they are winter breeders and are creatures of their own natural habits.

We have been using this method of soaking seed since the early days of breeding Canaries and wild-trapped Gouldians – yes way back then – and have never had a problem with bacteria or sour seed. We use mainly different types of millet together with a very small amount of canary seed with a sprinkle of sterilised I.D.Yeast for the Protein and Vitamin B content. This mixture changes when preparing them for the moult with an increased amount of canary seed fed. We also feed our hard seeds independently in separate dishes to cut down on the young birds wasting seed when they have a preference for a particular seed.

So does this system work? We think so, as we have bred 90 plus young birds so far this season – all parent reared.