We have received a very interesting email relating to the genetic difference between the new Gouldian mutation Lime, and (to date) the not- available ‘Cinnamon’ Gouldian’s arrival in this country. As the enquirer wrote, it is very confusing if you have never seen either mutation in the flesh as he believes he may have one or the other that may have turned up in his aviary. This is a very good question as I have Lime Gouldians myself and do realise the only real difference is the genetics, as the Lime carries slightly more dark pigment in the feather but do have the same coloured flight, tail, and back feathers, being a fawn colour on both Mutations.

Genetically these two birds are miles apart. The Lime is pure recessive and the Cinnamon is sex linked. Every Cinnamon whether it is a Canary, Parrot, or Finch, is sex linked, so if a new bird turns up in the aviary and shows the colouring of a Cinnamon but is not sex-linked, it is not a Cinnamon but it could very well be a Lime, particularly if it is recessive.

Below I have included an article, written in 2000 by my grandson Simon, explaining how sex link works in a simplified way. This is so important for anyone that is just starting to dabble in genetics as who knows what might turn up in your aviary this breeding season? The knowledge of genetics also arms you when you are purchasing birds, giving you the confidence that you know what you are looking for.

Aim:
To research the genetics of any sex linked bird and produce a table in which one can predict the chance of getting a certain type of bird. Also to answer the following five questions.

A genetic breakdown or spontaneous change (mutation) in a gene responsible for its pigment created the cinnamon bird. The effects this had on the cinnamon is that no black is found on a cinnamon bird, instead where there should be black pigment there is brown. This is unlike the normal where there is all black pigment. The eye colour changes to what is called pink, upon hatching the birds eye colour is a dark red colour although this darkens, as the bird grows older. The mutation also changes the dark legs, feet and beak of the bird to a fleshy colour.

Chromosomes are threadlike structures found within the nucleus of a cell. On this are located genes, which control hereditary characteristics. It is these genes that can mutate. These genes appear like beads on a string, The string being the chromosome. In humans the two male chromosomes are different and are called XY. The females are both alike and are called XX. In birds is it is the opposite. Males have two alike chromosomes, called XX, where as the female’s are different and are named XY. In all cases, including cinnamons and normals, only the X chromosome can carry mutated genes as the Y chromosome is only associated with femaleness. Therefore a male bird can have three possibilities.

Whereas a female bird can only have two possibilities:

This is as females have only one sex chromosome (X) and the Y chromosome can carry no mutated genes.

With this in mind the six possible combinations of birds was: 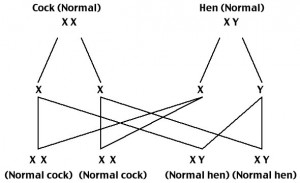 type of bird. These charts follow a standard formation and are as follows:

The name of the type of bird appears at the top with the chromosome description in it and it’s partner. The chromosomes then split and follow their separate paths. They then join up with another chromosome at the bottom and they are simply put together.  For this example I used two normals. 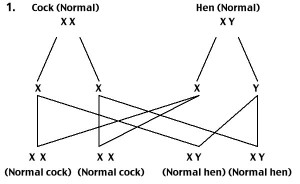 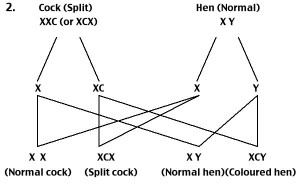 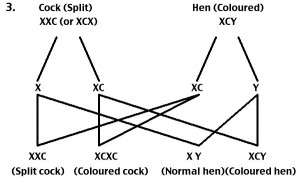 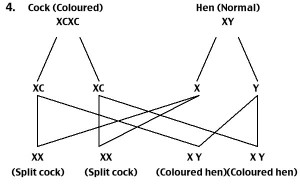 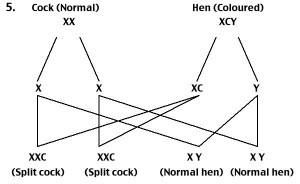 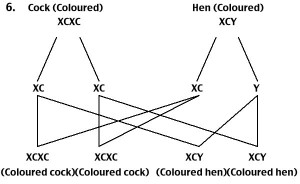 To discuss the results five common questions relating to the topic – sex linked birds – were created and are answered here. The questions were:

1. How did genetics begin?

3. What is the fastest way to start producing coloured birds?

4. What is the best way to start producing coloured hens?

5. What is the best way to start producing coloured cocks?

1. Gregor Johann Mendel is considered the person who began genetics and formed the basis of modern hereditary theory. He observed and tested at least 28,000 pea plants and he also created the terms still used today. These terms are dominance, for a trait that is shown up in an offspring, and recessiveness, for a trait that is covered and hidden by dominant gene.

2. As mutations are genetically weak, if you breed a weak bird to a weak bird it shall obviously produce a weaker bird. Size, colour and fertility shall start to diminish after two to three breeding seasons. This can simply be rectified through introducing a normal bird, as they are genetically stronger. This also introduces a larger gene pool that strengthens the bird further.

3. The first cinnamon mutation that will appear will be a coloured hen. This therefore means that her father was a split to cinnamon bird. You would then be best to put the cinnamon hen with the father, this should produce 25% coloured cocks, 25% coloured hens, 25% split cocks, and 25% normal hens. You can then start breeding colour to colour although it would be best if normals were introduced to the bloodline at least every 3 years.

5. There are only two ways to produce coloured cocks. First, to put colour to colour. This will produce 100% of the cocks to be coloured although diminish the quality of the offspring. The second way would be to put a coloured hen to split cock, which would produce 25% of the total birds being coloured cocks.

It is seen that genetics is a complex study and although this is only a small section of the vast topic it can be seen how important genetics is in understanding animals and plants. Without basic knowledge of genetics it would be near impossible to utilise a rare mutation such as the cinnamon. Many mutations have evolved over the years but have been lost due to lack of understanding and knowledge. This does not apply only to birds but to all animals and plants.

I feel that I have learnt a great deal about genetics and am satisfied that I was able to produce a table to predict the outcome of the birds. I found it interesting to see things such as a coloured hen with a normal cock cannot produce a coloured hen. I now understand why such a table is necessary. I see genetics as being an important part of the future.