Over the years we have used many Seed Hoppers, some good some not so good. Even the good ones eventually succumb to the Codling Moth. This pest thrives any where North of Sydney and is in plague proportions in the Tropics. Any container which seed is kept in is soon contaminated by the moth. Some of the seed we buy already have the moth eggs in it, especially if it has been in long term storage.These eggs are almost impossible to see until the hatching of the maggots (larvae). The first thing to be noticed is the moth web that the maggots spin to protect themselves and their food source. This web is similar to a spider web but not as fine; it has a more dense construction. Moths have only one purpose in life – to mate, lay eggs and continue the cycle. 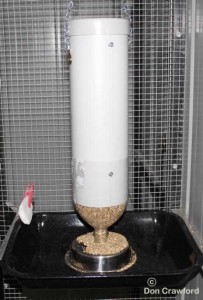 Making a Seed Hopper that was going to work was our project. We were confident that it would not be a major problem to build, all that was needed was a cylinder that could be sealed and a design that would allow the seed to flow freely. The problem would be the moth and how to eliminate this pest the natural way. Chemicals may be a far easier method and for sure would work well, but we could not see ourselves letting the birds feed small amounts of poison to young day-old chicks repeatedly, without believing they would not develop some major health problems. I have not forgotten the results of D.D.T. which was widely used in the past before being banned as a cancerous poison.

Our homework on natural products led us to two possibles, both which would suit our design perfectly. Also the use of two products may be a bigger deterrent to the moth than the use of only one. 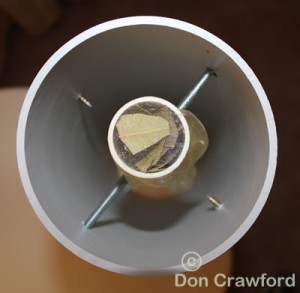 We decided to use Garlic Powder mixed in with the seed, as other breeders were using it successfully.
Garlic is a natural insecticide – it has a pungent smell and is unpleasant to bugs. Their soft-bodied larvae can be killed outright by strong garlic. It is also used as a Nematicide and Insecticide for the use on Cabbage Root Fly and Red Mite on birds. Garlic also has unique Allicin and Sulphur compounds and is the least toxic spray that you can use.

The other natural product we would use in the Hoppers is Bay Leaves. A herb from the Laurel Tree, this herb is used in pantries to repel flies, roaches and silverfish. It also discourages the growth of mould. The leaf contains Lauric acid which gives the leaf insecticidal properties. The vapor that it releases will kill insects slowly but effectively. The leaf is also used in cooking in the Mediterranean and in India mainly for the flavour, but is not eaten. 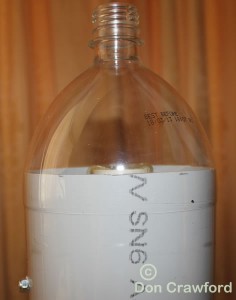 Fitting the funnel to pipe

The “pipe” we selected for the Hoppers is 110mm Sewer pipe, cut to a length of 300mm. Sewer pipe was selected for it’s long term durability. It’s also thick enough to screw into if needed. You can also buy “caps” to fit the pipe which is necessary to refill the Hopper. Finding a “funnel” to fit the Hopper was not so easy, as we needed the seed to flow out freely, and the funnel to be transparent so we could see how much of the seed was left in the Hopper.

What we found which would do the job perfectly was a rather large 2.25lt bottle of LA-ICE Cola. It is a perfect fit and looks great. (see photos – coming soon)

The pipe we would use in the middle of the Hopper was 35mm Plastic Water Pipe, which would store the bay leaves. This pipe would have lots of 5mm holes drilled into it to release the fumes that would allow the smell to penetrate through the seed. In order to stop the seed from clogging the holes, we made a cover for the tube out of a very fine mesh material called “Organza” which let the fumes out and stopped the seed from getting back into the pipe. 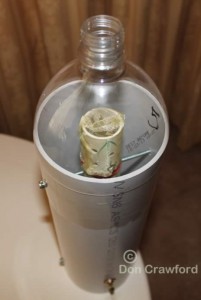 We positioned the 35mm tube down the centre of the Hopper, held in place by a length of 3/16 Threaded Rod, passing through the Hopper from side to side with a Nut holding it in position on either side. Once finished we had a trial run with 2kg seed, to find the pressure needed for the seed to flow freely out the bottom of the funnel. We set the Hopper just above the tray and found that the seed would flow nicely if set at approximately 4mm above the tray.

Put the threaded rod in the bottom area of the Hopper first, securing the funnel and the centre pipe in position. This will make any internal adjustments easier.

When finally fitting the Hopper in the chosen position, do so while the Hopper is empty of seed making it easier for any adjustments.